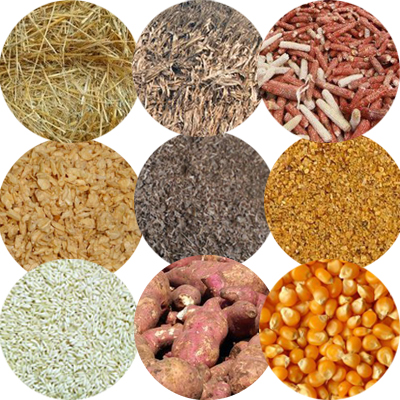 organic substances, widely applied in agriculture, pharmaceuticals, brewing, food and chemistry industries. The leftovers after fermenting are called fermentation residues which can be got from the following producing process.
1.1. Animal and human manure/crop straw—biogas
1.2. Corn stalk—lactic acid and alcohol
1.3. Sweet sorghum stalks—ethyl alcohol
1.4. Dried potato or corn—wine
1.5. Sticky rice—rice wine and rice vinegar
1.6. Corn, rice, wheat and potato starch—aginomoto
From this we can see fermentation residues are most the leftovers of crops or crop straws that are frequently used to make biomass pellet fuel. As is known that, while fermenting, the chemical components of raw materials change yet many of their features remain the same. Thus, the pelletizing purpose of crop and crop straw also applies to their byproduct.

2. Why to make fermentation residue into biomass pellets?
2.1. Energy shortage
BP Energy prediction shows that, the global requirement for energy will rise by 45% up to 2030, which is equivalent to the increase of two US’s consumption. However, according to current exploiting level of fossil energy, the energy consumption in the future 20 years will not only do great harm to environment but also make its sustainability and price beyond people’s affordable scope.
The biomass power generation originated from 1970s in Denmark, and the biomass fuels such as crop straws, biogas, sawdust and rice husk are widely developed in many American and European countries since 1990. With continuous researches and development, traditional biomass resources have been gradually deep processed into various forms among which pellet fuels including fermentation residue pellets account for an essential place.
2.2. Reduce pollution and prevent fire hazard
People are used to paying much more attention to the end products than byproducts, which is why most of the fermentation residues left behind in food, brewing and other related industries are stacked up randomly by the road or in waste yard. First, this will bring our living atmosphere unnecessary pollution, leading by odor and visual damage. Second, any stacking will take up space that has higher value applied for garden or storage room building. Third, as an inflammable, the leftovers may be lighted easily by accident and cause fire hazard. However when comes to fermentation residue pelletizing, none of these is a problem.
2.3. Excellent combustion features of finished pellets
You may ask that we can use the leftovers as fuel directly, so is it necessary and wise to make them into fermentation residue pellets? Answer to this question can be learned from the following comparison.

3. Is it feasible to make fermentation residue pellets?
3.1. Low cost and high profit
First, fermentation residues are easy to get. Most factories throw them away after related production is completed, so you just need pay a little or almost needn’t pay for them. Second, the  wood pellet mill machine is cheap. Only several months are required to recoup this part of investment, after which all the output is profit, electricity and labor force cost plus a little routing maintenance expense. Third, since the automatic feeding and discharging devices are available, about three workers are enough for the whole producing operation.
3.2. Attribute feasibility
The following chart shows some components of fermentation residues (exemplified by wine brewing) 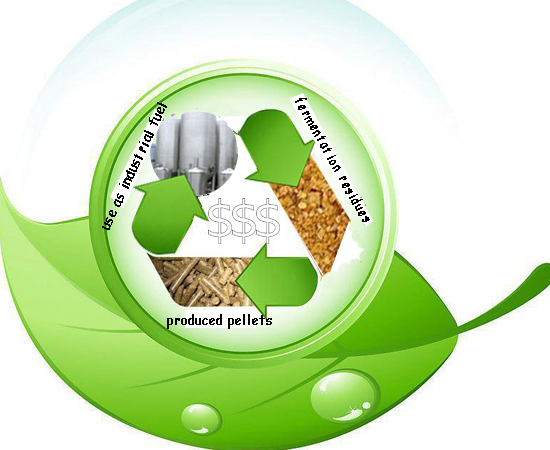 Conclusion
Want to turn waste into wealth? Want to make high profits from low investment? The above information can give you some hints about that. Making biomass into pellet fuel has become a trend, so have you kept up with it?